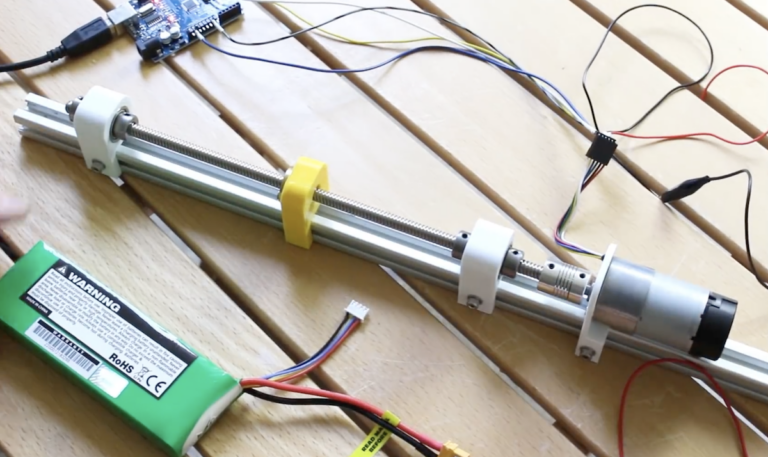 If this is your first tie facing these mechanisms you’re in for a little bit of confusion. Don’t worry. That’s natural. It is not something you can grasp on the first try. That’s why we are here. We’ll try to divulge this complicated subject for you so that in the future you can tell the difference and fully understand how they operate. Most issues for beginners arise when they see linear servos and actuators. They look like one-of-a-kind products. That’s the issue, they are not.

Unlike in some other domains, the eye test won’t do the trick. So, you’ll actually have to learn the difference. It is important to know it beforehand. So, when you find yourself in a  situation where you’re buying a linear motion by Tuli you know what you’re getting. The first sign that you’re getting one or the other product is the connection cable. But, if that differentiation skips your knowledge, you ought to know right now that the main difference between the two is inside the box.

As we said, the eye test will not aid you in 99% of cases. Yes, that makes the situation hard, we know. But, that’s how things stand. When you look at actuators and servos from an outsider they are nearly identical. So, how are you going to differentiate the two without too many complications? Well, in the future, it is going to be done with our help. A lot of our help. Don’t worry, you’re not the only one needing it. Most people even see them as the same products even when it comes to their function, and to an extent they are also right. That’s why articles such as this one are quite important. Let’s see what creates the difference and what makes them identical, and of course, how to differentiate the two.

When you look at an actuator you can imagine a simple motor; an electric one. They operate pretty much the same. How’s that? Well, it is simple. Give it power and it will start going. Stop the flow of power and it will halt. It’s that simple. When it comes to an actuator the situation is the same. This device is so straightforward. With power, it will operate. Switch it off and it will cease. They operate on a  clear on/off principle. A controlling position doesn’t come naturally for these devices, and they are unable to take over control.

On the other hand, we have servos. They are more than able to take over control. They actually function as independent organisms, which when commanded can go and take over a position and start operation on an order given in advance. So, it is not like you need to turn the switch on and off whenever you want a go motion and when you want them to stop. You can issue them an order, and let them work from there on their own. So, as you understand now, they might appear to be identical products, but they are not. Their function is totally different. Just like in real life, physical appearances can be deceiving. In the majority of cases, they are used to function tied to different applications.

If an identical specter of linear motion is a necessity for a project you want to run you are better off using actuators. What this means is that the range of motion is limited and you’ll benefit from motion that starts with an ‘on’ switch and ends with an ‘off.’ As we said, this motion is a straightforward one, and if you use repeating linear motion actuators will do the trick for you. As we said, the on/off command does the trick with them.

On the other hand, you have linear servos. It was already mentioned that their function is a little bit different. You can’t see it as an outsider but when put in the work they make all the difference in the world. They are better off when you need them to start working in a certain position and not only when they are given the green light by power injection. They are all tied to reacting to command once they reach a certain position. The majority of RC servos operate in this manner. You will notice that you’re looking at one of these servos by noticing that they have at least three, and in some cases even more wires. The first two are the ground wire and the power one. The third one is the signal wire which signals the servo the position it needs to reach.

If you look at the simple pictures of the two it is hard to tell a difference.  Even when you hold them in each hand, you can still get confused even after everything we have told above. In these last few paragraphs, we are going to try and make things even more simple for you. With these devices, it is needed. The linear actuator can be seen as a simpler device. The only way it is ever going to complete any given task is if you tell it to. On the other hand, you can view the servo actuator as the smartest of the two. It can work on a premeditated order which will start completing when it reaches the designated position.

Now that you have reached the end of this article, we can both agree that we’re talking about fairly simple devices once you get a grasp of what they can do and how they do it. But, we are not going to argue that even now they can lead individuals to confusion. Because of the situation, and their likeness, you need to view this text as a foundation for any future knowledge you’re going to attain. The more you work with servos and actuators the more you’ll understand them. After all, you know what they say about practice and making perfect. But, in the end, we hope that we provided you with enough substantial information that you can choose which one suits you better in any given situation.