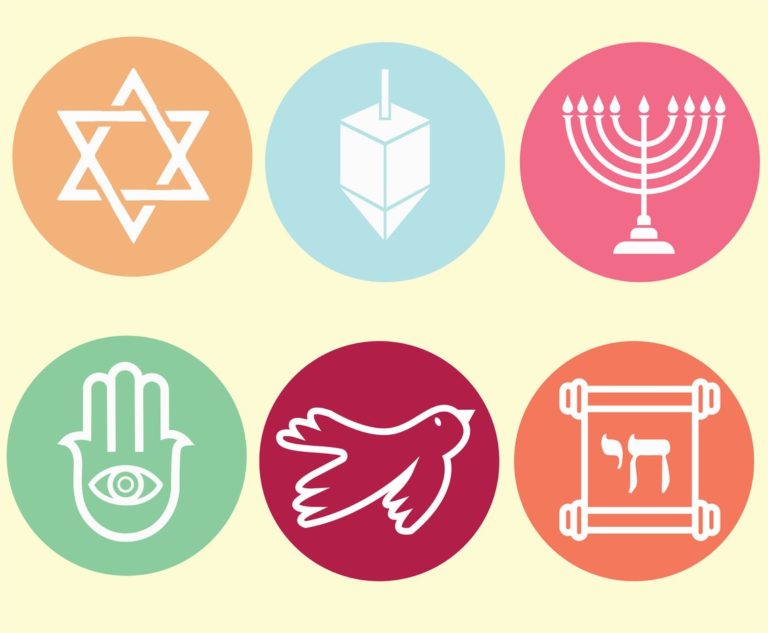 Each faith has its own symbols and so has the Jewish. But, as with anything in life, there are things more important than others. And that’s why we’ve decided to tell you all about the most popular symbols that are associated with the Hebrew faith.

The Two Tablets is a sacred symbol that can be seen on any synagogue, any Jewish hospital, and on the uniforms of the Jewish army chaplains in the United States Army and all of its branches.

But what does this symbol actually mean? Well, the two tablets are actually the ones that Moses received when sent on the divine mission by God.

He was instructed through the tablets to follow god’s will and to safely guide the Jewish people out of Egypt. On these tablets, the words of the 10th commandment can be seen, along with the first 10 letters of the Jewish alphabet.

Each letter is supposed to resonate with each commandment, and each one holds equal importance.

This symbol holds resonance with the one Moses built in the desert while guiding the faithful to safety. The Temple Candelabra is a memorable symbol that can be found in Holy Jewish Temples around Jerusalem.

The candelabrum holds very true importance to the faithful, as God asked rhetorically whether the temples needed lighting. So, the candelabra was built in the temples around Jerusalem to show god the testament of his followers. This artifact is seen as somewhat of a Divine statue.

The Torah Scroll is said to hold 600,000 letters that resonate with 600,000 Jewish souls. Safely speaking, this is a unique artifact with an even more unique sign.

Also, the Torah Scroll holds the Five Books of Moses.

Every letter is corresponding with a separate Jewish soul, and every follower of the faith has a portion of the Torah at his home. The faith says that every Jew is part of the Torah, so owning this scroll is nothing short of grave importance to the followers.

As tradition goes, every new and existing member of the faith must read the Torah.

4. Open Hands and the Pitcher

This symbol can mostly be found on gravestones.

You could say that the gravestone features more than one unique symbol to the faith. This is a symbol that tells a member of the Jewish faith is buried in this grave.

Onto one of the more popular decorations that can be found with followers of the Hebrew faith, a Lion and Eagle décor can be found on many Torah scrolls.

Also, this symbol can be found on many synagogues and on many artifacts. Fun fact regarding the Lion and Eagles is that they must always be placed on top or at the beginning of each scroll.

However, this symbol might confuse some of you since both are very violent animals. Furthermore, people are not instructed to dine on these animals, so why are they so important?

Well, it goes without saying, if you know your Hebrew history, that the lion is the symbol of the Judah tribe. This tribe gave us the likes of Solomon, David, and of course, the Messiah.

The lion is seen as somewhat of a great heritage and the mightiest of all animals.

You can find this symbol, along with the eagle, deer, leopard, and many more, on items exclusive to the faith. For more information on where to obtain such items and gifts, make sure to visit jewish.shop.

This symbol was found on many coins throughout Jewish history. The lulav along with hades, etog, and aravah are part of the holiday of Sukkot.

Each one has its own symbol and each one teaches different things. According to the teachings of the Mitzvah, each of these four represents a different kind of Jew. But if you didn’t know, no Mitzvah can be complete without having all four together.

This one is very important as it directly speaks to the seven species of which the land of Israel was built upon. The seven species include dates, olives, pomegranates, figs, grapes, barley, and wheat.

Also, they’re quite popular as décor and can be used with many items such as kosher cups, silverware, plates, etc.

If you aren’t a follower of the faith, and if you have no idea about Judaism, the Star of David is probably the only symbol that you recognize.

This is a symbol that holds the same importance as the Cross in Christianity, the Star and Crescent in Islam, the Wheel of Dharma in Buddhism, the Om in Hinduism, and many more ancient and sub-religions.

It is the most easily distinctive symbol of the religion that holds great importance. The star speaks of the origin of David and it can be found literary everywhere and on anything that derives from Judaism.

The dove and olive sign has lots of meanings in our world; one is that it is an international sign of peace. But contrary to popular beliefs, it actually derives from Judaism, and it speaks about the dove that brought Noah an olive branch that signifies the Great Flood has ended.

However, as we said, this is a symbol for many things; even in Judaism. For example, in the book of Jeremiah, God has described his followers as olive trees with ripe fruits.

God also says that the olive trees have very strong leaves that never fall, and so shall his followers. This isn’t even the only other mentioning of the dove and olive. The symbol is also mentioned in the Song of Songs along with dozens and hundreds of other references in the Torah.

This symbol unique resonates with each Jew and was unique to the faith before its international use.