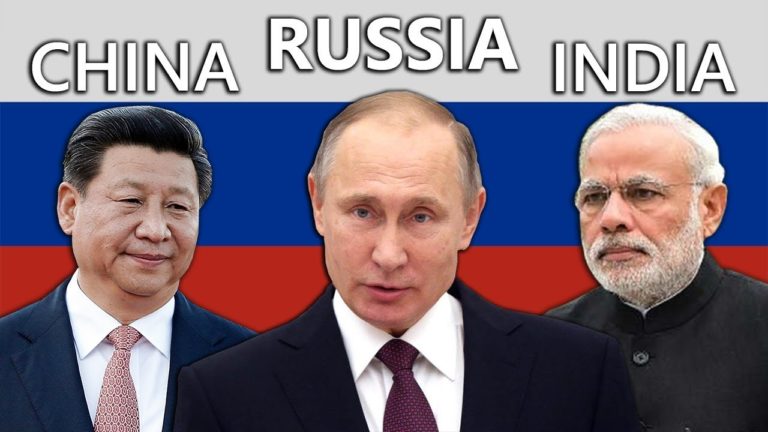 Gone are the days when the US and Russia (read the former the Soviet Union) used to dominate world politics. With the fall of ‘communism’ in the 1990s, the US emerged as the lone ‘superpower’ in the world.

However, time and again, China tried its best to counter American influence, especially at the UN with the help of Russia. Even the US’ emergence as the only super power prompted the EU members to strengthen ties with each other in the early years of this century.

In the last few years, the global political landscape has changed and developing nations, like India, Brazil and South Africa, have started countering the American hegemony.

Political analysts believe that Russia, China, and India can jointly dominate the new multi-polar world order in the coming years. In an article published in Pravda, Francesco Brunello Zanitti – Programme Director of Southern Asia Research, Scientific Director of the Italian Institute for Advanced Studies in Geopolitics and Auxiliary Sciences, and senior member of Editorial Committee of ‘Geopolitics’ – has said that Kremlin’s new approach towards the two Asian powers can be considered as ‘a vector for a new multi-polar world order’

In December 2014, Moscow, Beijing, and New Delhi signed a series of significant bilateral agreements and took a giant step towards global transformation from an unipolar to multi-polar world order. Zanitti explained that by imposing sanctions, the EU and the US brought Russia ‘closer’ to China and India in 2014. President Vladimir Putin has decided to strengthen ties with the two Asian powerhouses because he knows that China and India can serve Russia’s long-term strategic interests. The current political scenario in Eastern Europe and West Asia has made Kremlin’s job easy. Beijing and New Delhi, who have always considered Moscow as a ‘reliable’ partner, have no problem in strengthening economic and trade ties with Russia.

Even before the Ukrainian crisis, Russia, China and India started actively co-operating with each other in other multilateral organizations, like the BRICS forum (Brazil, Russia, India, China, South Africa). Such co-operation have provided them an opportunity to develop new platforms for bolstering political, economic and defence co-operation.
Analysts are also of the opinion that ‘close’ co-operation between the three powers will be beneficial for Asia in the long run. The current political situation in Asia is highly influenced by the Sino-Indian rivalry. In such a situation, friendship with Moscow could prompt Beijing and New Delhi to resolve their outstanding issues and maintain peace in the region. “While China looks favourably to economic consequences arising from its co-operation with Russia, India plans to revive its strategic partnership with Russia,” stressed Zanitti. According to him, a stronger energy relation between India and Russia can change the political equilibriums of Asia significantly.

In recent times, the Narendra Modi administration in India has taken ‘cautious’ steps as far as its relation with Russia is concerned. Although New Delhi has not backed Western sanctions against Russia, it has also not recognised Crimea as a legitimate part of Russia. At the same time, India did not criticise Moscow openly for the current Ukrainian situation. Prime Minister Modi, who is well aware of ‘the importance and priority assigned to Moscow in the strategic calculus of New Delhi’, has said that Russia will remain the most important partner of the South Asian nation in defence sector.

It is a fact that the Indian premier is eager to have stronger defence ties with US, but he knows that it is impossible to ignore Russia’s role. Otherwise, Russia could become a strategic military partner of Pakistan and a Russian-Chinese-Pakistani partnership would pose a serious threat to New Delhi.