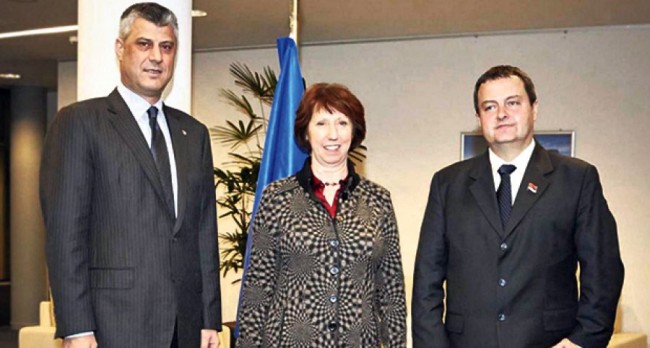 BRUSSELS – Freedom of movement will be respected without “discrimination”, said on Monday night Prime Minister of Kosovo Hashim Thaci after the meeting with EU High Representative Catherine Ashton and Prime Minister of Serbia Ivica Dacic.

Thaci told reporters that Kosovo authorities will respond to every request by Serbian officials to visit Kosovo if they submit the request to competent institutions and by the law, while Prime Minister of Serbia expressed satisfaction with the agreement.

“This was one of the most successful meetings in Brussels,” said Dacic.

Dacic and Thaci both had bilateral meetings with Ashton on Monday afternoon, and in the evening they all set together and looked for the ways to solve the problems resulting from Pristina’s decision to forbid Serbian officials, including Prime Minister Dacic, to enter Kosovo territory. Ashton is pleased that both Prime Ministers accepted her invitation and commented that it is a good sign they are both ready to cooperate in order to find a solution acceptable for both sides.

Dacic, in the eve of the meeting, said that in the case the ban remains in force, he will withdraw from Pristina – Belgrade dialogue. Prime Minister said that the ban is “an unprecedented scandal” and added that even before that, when he received information that something like that might happen, he warned ambassadors of quint (USA, France, UK, Italy and Germany) and the EU what consequences this may cause.

The Minister in charge of Kosovo and Metohija Aleksandar Vulin said on Monday that he expects the meeting in Brussels to result in lifting the ban.

“There are a lot of problems that need to be solved,” said Vulin.

Vulin also said that Belgrade asks for the basic requirements for Serbs to go to the elections in Kosovo, scheduled for November 3.

As he said, this means to ensure that votes of Serbs are not stolen or misinterpreted. In order to achieve this, Vulin said that Serbs in Kosovo must have their representatives in election bodies so the votes wouldn’t be counted without them.

Commenting on the decision of Pristina to forbid Serbian officials to enter Kosovo, Vulin said that this is a unilateral act that endangers the Brussels negotiations.

“It is clear that Pristina is the biggest opponent of Serbs voting in the elections, because you can’t explain that a Brussels agreement signatory cannot go to Kosovo and implement it,” said Vulin.

The Secretary General of the Government of Serbia Veljko Odalovic said that he “at least” expects Brussels to limit arrogance of the Kosovo institutions, but also Serbs who participate in the local elections, and are not representatives of a single Serbian list.

“What we at least expect is that one question, that has not been resolved so far, to be resolved. This is the question of (Serbian) member of the Central Election Commission of Kosovo (CEC),” said Odalovic.