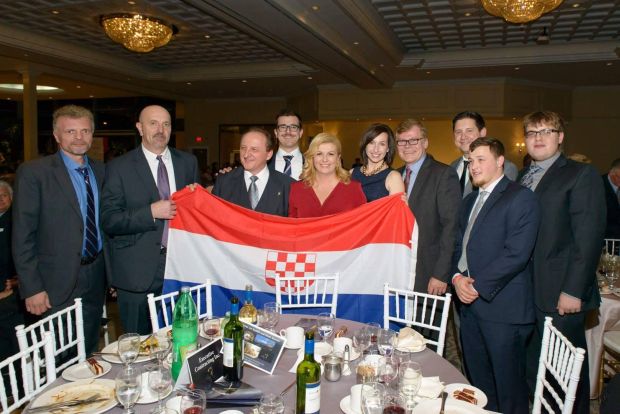 The Independent State of Croatia (NDH) was a World War II puppet state of Germany and Italy, which was established in parts of Axis-occupied Yugoslavia. The NDH was founded on 10 April 1941, after the invasion of Yugoslavia by the Axis powers.

The NDH consisted of modern-day Croatia and most of Bosnia and Herzegovina, as well as some parts of modern-day Serbia and Slovenia. The regime targeted Serbs, Jews, Roma people and anti-fascist or dissident Croatians and Muslims, as part of a large-scale genocide campaign in places such as the Jasenovac concentration camp.

Professor from Toronto Tihomir Janjicek published, with her permission, a photograph with Croatian President behind a Croatian flag as it was during the Nazi Independent State of Croatia in the World War Two.

As stated, Janjicek wrote that he placed the flag with personal permission of Croatian President.

“The President saw the flag and as you can see on the photograph, she personally held the flag. I congratulate the President on her sincere Croatianism. This flag is my personal copy and it was purchased in Zagreb at the time when it was the official Croatian flag. This flag gathers all Croats, in Croatia, BiH, Serbia, Montenegro and around the world, wherever they are,” wrote Janjicek.

Croatian portal wrote earlier that the coat of arms that permanently became Ustasha emblem was removed after the fascists were defeated in World War II, and that during Yugoslavia, Croatia used different coat of arms, which after independence was preserved as the symbol of the Republic of Croatia.