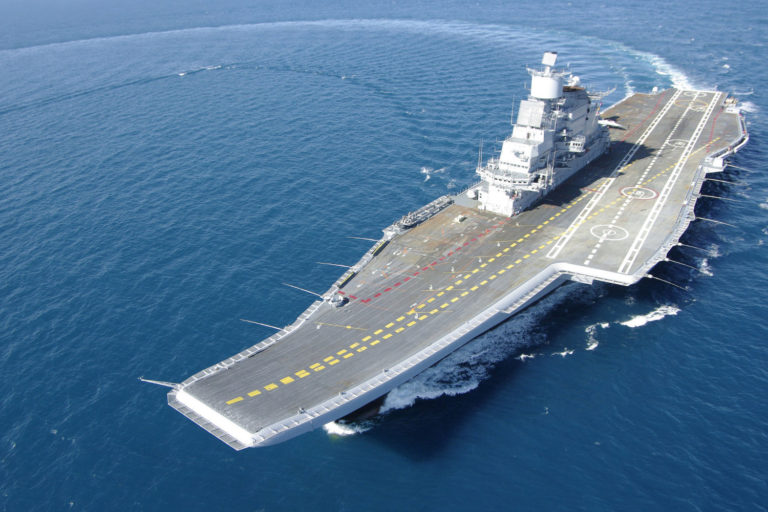 India, jostling for the same strategic space in the Indian Ocean Region (IOR) with neighbouring China, plans to build a powerful Navy in order to guard its huge maritime interests spanning from the Persian Gulf to Malacca Straight and beyond.

Indian Navy Chief Admiral Robin Dhowan has confirmed the news, saying that it is important for the naval forces to boost their ‘blue water capability’ to counter the increasing naval presence of China in the IOR. Talking to the local media in New Delhi, Admiral Dhowan recently said that the Navy was discussing ‘a long-term naval technology roadmap’ with the Defence Research and Development Organisation (DRDO) and other defence experts. According to the Navy chief, the main aim of the roadmap is to make the Indian naval forces ‘stronger’.

Admiral Dhowan informed the media that the Navy has already placed an order with the DRDO for 42 warships, six submarines, one aircraft carrier, six destroyers and seven stealth frigates worth around USD 47,113,201,401. He said that the DRDO would build six advanced stealth diesel-electric submarines – with both land-attack missile capabilities and air-independent propulsion for greater underwater endurance – with foreign collaboration under Project-75-India. He also said that the Navy was ready to fast-track finalisation of its plan to indigenously construct India’s largest-ever aircraft carrier – the 65,000-tonne ‘INS Vishal’ – so that it could acquire the nuclear-powered aircraft carrier in the next 10 years.

As far as the Navy’s future plan is concerned, the chief said: “We would like to leverage the country’s shipbuilding capability, both in the private and public sector.” Admiral Dhowan believes it is not that the Chinese Navy is very superior, but India is losing the edge and fast. He explained that while India has around 140 warships, China has more than 225. Currently, India has two aircraft carriers and one of them will be retired in 2016. On the other hand, China – which has only one aircraft carrier – is rapidly building two conventional and two nuclear-powered carriers.

While India has 13 old diesel-electric submarines and only one nuclear-powered submarine (on lease from Russia), China has 51 conventional submarines and five nuclear submarines. The Chinese Navy is also getting ready to include five advanced Jin-class nuclear submarines in its fleet. China’s growing naval strength has prompted India to take all the necessary steps to build a ‘powerful’ Navy, admitted Admiral Dhowan.

Meanwhile, defence experts are of the opinion that no country in the world faces a strengthening nexus of two nuclear-armed neighbours – China and Pakistan – as India does. In his article published in the ‘Hindustan Times’ daily on May 6, noted geo-strategist Brahma Chellaney writes that it is not possible for any country to tackle “two expansionist nuclear-armed neighbours with a proven track record of covert actions in breach of international norms” without a “professedly proactive foreign policy”. According to experts, it is important for India to work out a counter-strategy to stop China from expanding its footprints in the IOR.