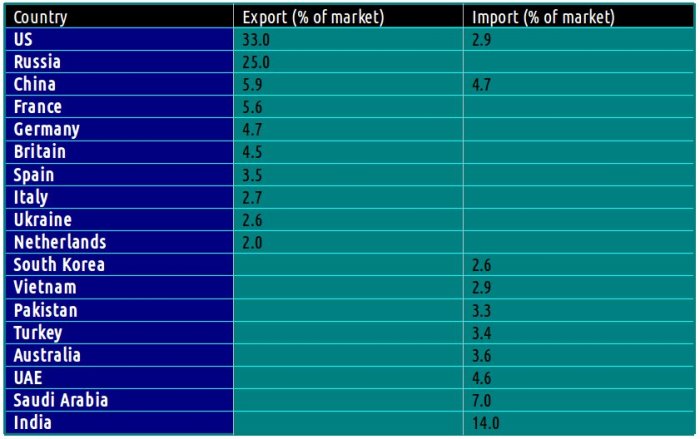 India has once again emerged as the world’s largest importer of weapons and military equipment, accounting for around 14% of the total international imports. The South Asian powerhouse is followed by Saudi Arabia (7%) and neighbouring China, as the Asian giant occupies the third position in the global arms import list with 4.7% of global share.

The United Arab Emirates (4.6%), Australia (3.6%), Pakistan (3.3%), Vietnam (2.9%) and South Korea (2.6%) are other largest importers. Interestingly, Russia has also maintained its status as biggest supplier of arms to India, accounting for some 70% of all military equipment supplies to New Delhi.

In its latest report released on Monday, Sweden-based think-tank Stockholm International Peace Research Institute (SIPRI) said that it prepared the list on the basis of data collected in 2011-15. According to the report titled ‘Trends in international arms transfers-2015’, the volume of imports (by India) had increased by 90% between 2006-10 and 2011-15. SIPRI expressed serious concern over the current security scenario in Asia, saying that the volume of India’s imports were three times greater than its two powerful nuclear-armed neighbours (China and Pakistan) in 2011-15. The think-tank believes that India had to import arms from foreign countries on a large scale because its own arms industry failed to produce competitive indigenously designed weapons.

The report further said: “In the last five years, Russia has supplied 70% of India’s arms imports, while the USA has supplied 14% and Israel 4.5%.” Currently, India imports fighter jets, sea-borne aircraft carriers and Mi-17-V5 helicopters from Russia, specialised transport planes, the C-130-J Super Hercules, C-17 Globemaster and maritime surveillance planes from the USA, and UAVs and radars from Israel.

Meanwhile, China has almost doubled arms export in the last five years and the biggest buyer of Chinese arms is Pakistan. Apart from Pakistan, Beijing has also been helping Bangladesh and Myanmar in ramping up military prowess. For New Delhi, China’s emergence as the third largest exporter of weapons (ahead of France and Germany) is a real cause for concern, as three biggest benefactors of Chinese arms (Pakistan, Bangladesh and Myanmar) share their boundaries with India. These South Asian countries could potentially cause trouble for India, as they accounted for 71% of Beijing’s exports in 2011-15. During this period, Pakistan alone bought 35% of Chinese weapons. Beijing’s military budget in 2015 was CHY 886 billion, 10% more than the year before. China’s aggressive defence policy has prompted India to import modern weapons mainly from Russia, America and Israel.