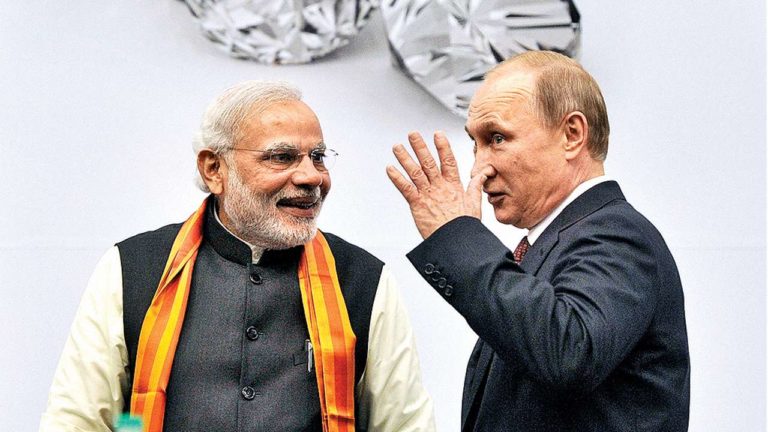 Indian political experts believe that Russian President Vladimir Putin’s upcoming visit to India will be a crucial one as it will give a much-needed boost to bilateral ties.

The Russian strongman will visit the South Asian country in December to attend the 15th annual India-Russia Summit. Ahead of his visit, the Indian experts have said that Putin’s personal relation with Indian Prime Minister Narendra Modi will make it easier for Moscow and New Delhi to explore new avenues for joint partnership in many fields, such as defence and energy. During their meeting on the sidelines of the sixth BRICS Summit in July, the Indian premier told Putin: “Even a child in India, if asked to say who is India’s best friend, will reply it is Russia because Russia has been with India in times of crisis.” In an article published recently in ‘Hindustan Times’ daily, Chairperson of Centre for European Studies at India’s Jawaharlal Nehru University and ICCR Chair on Contemporary India at the University of Leuven in Belgium Gulshan Sachdeva said that the Indo-Russian ties recently experienced a change after remaining low key for a couple of years. According to him, India’s renewed focus on the international North South Trade Corridor, possible entry into the Shanghai Co-operation Organisation and increasing linkages with the Customs Union of Belarus, Kazakhstan and Russia have brought the two countries ‘close’. He also said that Moscow has already shown interest in Modi’s ‘Make in India’ initiative, especially in defence and infrastructure. Russia has indicated that it is ready to produce civil and light transport aircraft in India, if the Modi administration allows Moscow to do so. Indian Commerce and Industry Minister Nirmala Sitharaman told the Parliament on Friday that the government welcomed the Russian interest, as it was committed to bolstering bilateral investment and trade co-operation with the ‘friendly’ nation. The minister informed the House that Russia wants to produce civil aircraft, light transport aircraft and helicopter with its own technology. According to Sachdeva, the two countries, which share excellent political relations, elevated their strategic partnership to ‘special and privileged strategic partnership’ in 2010. They have signed 128 agreements and memorandums of understandings in the last 14 years. Currently, Moscow and New Delhi concentrate on deliverables with clear timelines, stressed the expert. Sachdeva is of the opinion that now is the ideal time for India to forge some serious energy ties with its ‘old’ friend, as Russia is trying hard to find new markets for exporting energy because of the ongoing Ukrainian crisis and economic sanctions imposed on it by West. According to sources close to Kremlin, the Russian government has prepared a vision document, outlining a gas pipeline, an oil pipeline and a swap mechanism deal, which may also facilitate Indian oil payments to Iran. With both India and Russia enjoying ‘close’ ties with Iran, the Russian initiatives will certainly be a game changer in Indo-Russian relations.