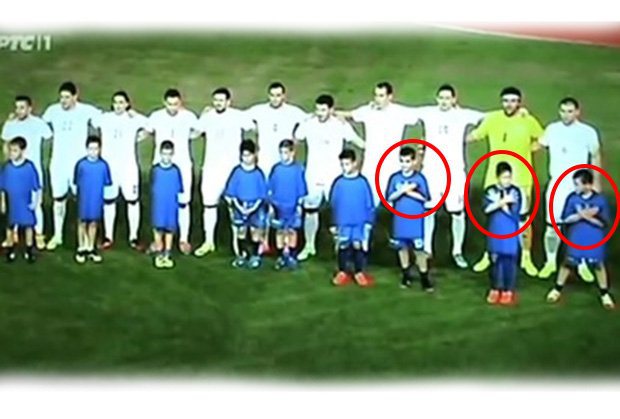 BELGRADE – A series of Albanian provocations has continued ahead of recent Greece vs. Serbia football friendly in Chania, when one of the boys who accompanied the players onto the pitch crossed his hands over his chest, in a gesture symbolizing the double-headed eagle depicted on the flag of Albania, during the sounding of the Serbian anthem. The friendly match was played in Chania, on the island of Crete, on Tuesday. The photo posted on the web portal Mondo shows the boy standing in front of Serbia captain Branislav Ivanovic with hands crossed over his chest, a traditional Albanian salute which its footballers adopted as a goal celebration.

The day before the match, the authorities said that maximum security measures will be in place considering that around 100,000 Albanians live on the island. On the same day in Genoa, pitch invasions by Albanian supporters caused three interruptions of the friendly match with Italy, and in the previous friendly with France in Rennes, the flag of the so-called greater Albania was displayed, the same one that caused the Serbia-Albania European qualifier in Belgrade on October 14 to be abandoned.

The Union of European Football Associations (UEFA) registered the match as 3-0 in favor of the home team but deducted three points from Serbia due to the incidents that followed and fined both football associations EUR 100,000. Both the Serbian and the Albanian FAs appealed the ruling, and the final decision will be made by UEFA’s Control, Ethics and Disciplinary Body on December 2.