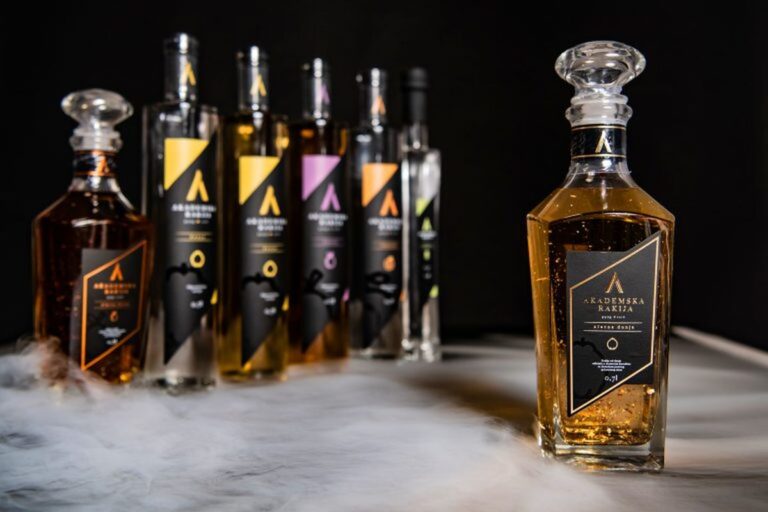 Brandy is one of the most popular drinks in the Balkans, and therefore in our country, in Serbia. The word brandy itself comes from the Arabic word “al-rak”, which in free translation means sweat. It arrived in Serbia and the Balkans with the expansion of the Ottoman Empire in the 14th century.

Aristotle wrote in the 14th century BC that sea water, wine, and many other liquids could be turned into drinking water if they were subjected to a distillation process. Of course, the technology at that time was not at an adequate level, so these things only happened in the 8th and 9th centuries of the new era. Arab alchemists devised “alambikes”, which they used to obtain the basis for perfumes. These instruments proved to be an excellent solution, and the alchemists of that time used them in their attempts to obtain gold from base metals.

The distillation process itself spread very quickly in Europe, and thus the production of distilled alcoholic beverages began in many countries. Recipes have become a national pride, they have been passed down from generation to generation, so for some drinks it is impossible to determine exactly where they originated. What is certain is that in the 15th century, the production of drinks began, the so-called national drinks in various European countries, so we get gin from England, vodka in Russia and Poland, and of course, the well-known brandy in the Balkans. In Serbia, brandy was produced from various fruits, most often plums, and only at the end of the 19th century, after the reduction of wine production.

Brandy can be divided into brandy produced by distillation of fruit (plum brandy, apricot, quince, etc.), rye whiskey, potato vodka, sake (rice brandy from Japan), corn (grain brandy originating from Germany). Brandy is obtained by alcoholic fermentation, most often fruit. Of course, this does not mean that it can only be obtained from fruit, as we stated above. Sugar is often added to brandy before fermentation in order to get a larger amount, of course, this leads to a decline in the quality of the brandy itself.

Types of Brandy and Academic Brandy

Plum brandy, the so-called Slivovitza, is the most popular brandy in Serbia, and can be considered one of the biggest brands in our country. It is consumed on every occasion and in all places. Production is reflected in the distillation of the pomace formed from a mixture of ripe plum fruits, which have previously undergone a fermentation process. After the second distillation, plum brandy is stored in oak barrels and plum brandy itself participates in 80% of the total production in Serbia. As a true example of domestic, quality and premium brandy, for all occasions, the Academic Plum Brandy, the so-called Golden Plum, stands out.

Golden Plum, from Academic Brandy, is a premium product created by careful selection of the highest quality plum fruits of domestic varieties. It is a plum brandy that is at least three years old, after which it is bottled with the addition of 23-carat gold leaves, after which it got its name

Apricot brandy is recognizable by its exceptional aroma. For the production of this type of brandy, apricot varieties such as “Kecskemét Rose” and “Hungarian Apricot” are mainly used. In order to obtain brandy, apricot fruits must be overripe, while enzymes and certain yeasts are used during distillation. Therefore, Apricot Brandy can be recognized by its phenomenal scent and the finest aroma that awakens all the senses in individuals. With the combination of the above two varieties of apricots, no one can remain indifferent.

Quince brandy itself contains a small amount of fruit sugars, so the quince fruits used to produce this brandy are left to stand until completely overripe. Before the fermentation process, the fruits need to be ground, for successful fermentation, as well as to add yeasts and nutrients that are based on nitrogen or phosphorus. After the first distillation, the alcohol content is about 30%, while after the second it can go up to 80%.

Other brandies that are also very popular in Serbia and in the Balkans are Viljamovka, ie pear brandy, Klekovača, Lozovača, and Akademska Rakija (en. Academic Brandy) also introduced one exotic brandy, which may be more suitable for the fairer sex, and that is Pineapple Brandy. Made in the same way as other Serbian brandies. The production process is reflected in the use of exclusively pineapple, which is then blended and pure fruit puree is made, with previously cleaned all parts of the fruit that are not normally used in human nutrition. The result is magical, and this pineapple brandy is increasingly attracting attention on the market of domestic alcoholic beverages.

So, if you ever decide to visit Serbia, make sure that you try our food and drinks. To Serbian Brandy is one of the most famous drinks in Southern Europe & Balkans, and in combination with Serbian hospitality, Srpska rakija or on English Serbian brandy, is the must try thing.