A shocking text by Senegalese Bakary Kante, head of the UN mission in 1999 about the horrific consequences of the bombing of Serbia was never published, “Vesti” reported.

In May 1999 the United Nations have hidden from the public the report by Bakari Kante, head of the first mission of UNEP (United Nations Environment Program) about the environmental consequences of the bombing of Yugoslavia.

The UN has never published the text, but parts of it leaked to the public thanks to the interviewee of “Vesti”, American independent journalist Robert Parsons, a reporter from the international institutions in Geneva.

He managed to get Kante’s report from his source in UNEP and publish its parts in June 1999 in Geneva daily “Le Courrier” in an article entitled “Hidden alarming report on the consequences of the bombing of Yugoslavia: Toxins that UN will not see”.

Parsons spoke exclusively for “Vesti” about how reports on the health consequences of the use of depleted uranium (DU) weapons in the Balkans were censured and changed in the offices of the United Nations.

After 12 days of his stay in Yugoslavia, which was still being bombed at the time, in May 1999, where he was with missions of other agencies of the UN system, Bakary Kante submitted a report to UNEP which speaks of ecological horror: atmosphere and the soil in former Yugoslavia have been permanently contaminated with toxic materials because of the bombing of industrial-chemical complexes and use of depleted uranium weapons.

The report was categorical in the assessment that the future generations living on the bombarded soil will suffer from cancer, leukemia, the number of miscarriages and deformities of newborns will be increased.

Kante’s report further says that because of the bombing, the nature in Yugoslavia has been contaminated with toxic substances among which the most dangerous is polychlorinated biphenyl (PCB), highly cancerogenous and responsible for immunological diseases. The report stresses that one liter of PCB is enough to contaminate one billion gallons of water.

PCB is located in the electrical substations and numerous oil refineries which were the target of NATO. It is added that the bombing of numerous factories which processed heavy metals caused, among other things, spreading of cadmium and methylmercury (the most poisonous form of mercury). These are metals that are poisonous even if they are spread on an area of several thousand kilometers. The result – the Danube was poisoned.

In the eight chapter of the report Kante speaks about the pollution caused by the use of depleted uranium weapons. “According to available data, NATO used depleted uranium ammunition targeting military and civil targets”.

A 30 – milimeter ammunition was used. It was fired mostly from aircrafts “A-10”, as well as within cruising missiles “Tomahawk”. These missiles can penetrate 57 mm thick steel.

Their load is radioactive and it is believed that they contain uranium 238, whose radiation is approximately 3.4 Mbq. Uranium belongs to a group of toxic elements that enter the second group of radionuclides of very high toxicity. This kind of ammunition is nuclear waste and its use is very dangerous to health.

Kante further says: “During the use (explosion) of the depleted uranium weapon is produced uranium oxide (U308 and UO2) as well as, among other things, very reactive gases radium and radon. The oxide particles have a width between 0.5 and 5 microns, and wind can carry them to the distance of several hundred kilometers.

Since in the region of Yugoslavia dominate northwestern winds, this means that the pollution goes from Yugoslavia to Hungary, Germany, Croatia and Bosnia, or to Albania, Former Yugoslav Republic of Macedonia and Greece.” 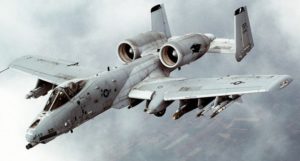 An A-10 Thunderbolt II from the 81st Fighter Squadron, Spangdahlem Air Base, Germany, pulls away from a tanker (not shown) after refueling on the way to Serbian targets during Operation ALLIED FORCE. – Photo: Wikipedia

Robert Parsons says that one directly informed source told him that in July 1999 a group of Swiss scientists came to even more dramatic conclusions about the effects of DU in the Balkans, then those contained in the prohibited report of Bakary Kante.

Their research was part of the activities of the diplomatic group FOCUS, consisted of Switzerland, Austria, Russia and Greece. As Switzerland was the one paying all the expenses, other members of the group had to remain silent, said Parsons.

Kante warned: “Radiological and chemical contamination do not make a difference between the military personnel who use these missiles, objectives, territories, innocent civilians, media, groups which are there to provide different kind of assistance, nor this contamination stops at state borders, or is time limited. The half-life of depleted uranium is 4.5 billion years”.

Staying in FRY in May 1999, while the bombing was underway, Kante witnessed ecological disaster: “Serious damage was caused to the human environment with destruction of oil refineries, oil-chemical complex, chemical and fertilizer plants, pharmaceutical and other industrial plants.

Existing and potential consequences of the conflict are serious for human environment and affect mostly Serbian part of FR Yugoslavia. Nature and also the population in the Balkans could also be in danger. If the pollution crosses Yugoslav border it could hit other countries in the region. It could also complicate the tragic situation of refugees in some neighboring countries,” says his report.

“The settlements in Kosovo are hit the hardest,” says Bakary. He concludes that “different kinds of international help is needed” so that FR Yugoslavia could face the consequences caused by the bombing to both human environment and the population.

In his report Kante also warned: “NATO bombing has happened at the time of sowing of crops vital to the population – corn, sunflower, soybean, sugar beet and vegetables. Cast depleted uranium influenced the quality of air, soil, water, which resulted in both short-term and long-term consequences in the food chain”. 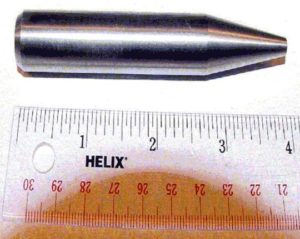 DU penetrator from the A-10 30mm round. – Photo: Wikipedia

The truth can not be hidden – Robert Parsons

“While NATO trumpeted on all sides about its “humanitarian intervention”, the report we now talk about spoke of ecological disaster without precedent in European history,” said Parsons. He recalled that in May 1999 representatives of various UN organizations, among which UNEP, came to mission in FR Yugoslavia and that subsequently every agency should have sent its report.

“Something unusual happened – nobody spoke of the report of UNEP. As soon as it was submitted, the report was classified in the UN and hidden from the public. It probably ended up in the headquarters of UNEP in Nairobi. None of the humanitarian organizations in Geneva was aware of what was going on, not even the employees in the headquarters of UNEP in Geneva,” said Parsons.

“I received Bakary Kante’s report from my contact in UNEP. He gave me the code to use the photocopiers and I quickly printed 30 copies. Geneva “Le Courrier” gave me a whole page on June 19 1999 and I passed everything that was in the censored text,” said Parsons.

After reading the article in “Le Courrier”, UN agencies that participated in the mission in Yugoslavia addressed the reporter rather than the UN, asking him to send them the whole report as they received incomplete text from UNEP. Then a press conference was organized in which he asked Klaus Topfer, the Secretary General of UNEP, why was Kante’s report hidden from the public.

Topfer replied that all agencies got a copy of the report. ‘Well of course they received it because I had sent it to them!’ to which Topfer, again, coldly replied ‘Well, they received the report – what is the problem?’,” Parsons described some moments from the press conference.

Parsons added that the conference, held at the UN headquarters in Geneva, lasted almost an hour and that Topfer left the room dripping wet. 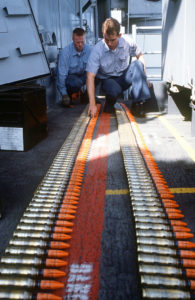 Gunner’s mates inspect linked belts of Mark 149 Mod 2 20mm ammunition before loading it into the magazine of a Mark 16 Phalanx close-in weapons system aboard the battleship USS MISSOURI – Photo: Wikipedia

Parsons said that already in February 2000 the data of the Dutch government in outlines coincide with the data of the U.S. non-governmental organization MTP (Military Toxic Project). In January 2000 MTP asked the U.S. government to lift the confidentiality tag from the files on the use of DU in Kosovo. MTP received the file on January 30 2000 and based on it, the NGO calculated that 9.45 tons of nuclear waste was dumped on Kosovo.

It was only after a great public pressure that the Americans acknowledged that the ammunition was stuffed with “dirty” uranium, the most dangerous to humans and the environment.

The Balkan working group within UNEP was the one to alarm the world public on February 16 2001 by announcing that “dirty” uranium was dumped on Kosovo.

It was announced than that the analysis of 340 samples of soil, water, etc. had shown the presence of transuranium elements such as U-236 and traces of plutonium and fission processes. The presence of plutonium was confirmed by two laboratories – the Swedish Institute for Radiological Protection and the Swiss laboratory AC-Speiz.

Zaev ready to make concessions for NATO and EU membership

Is it Possible to Take Cannabis While Taking...

How Meditation Can Help You After A Divorce...