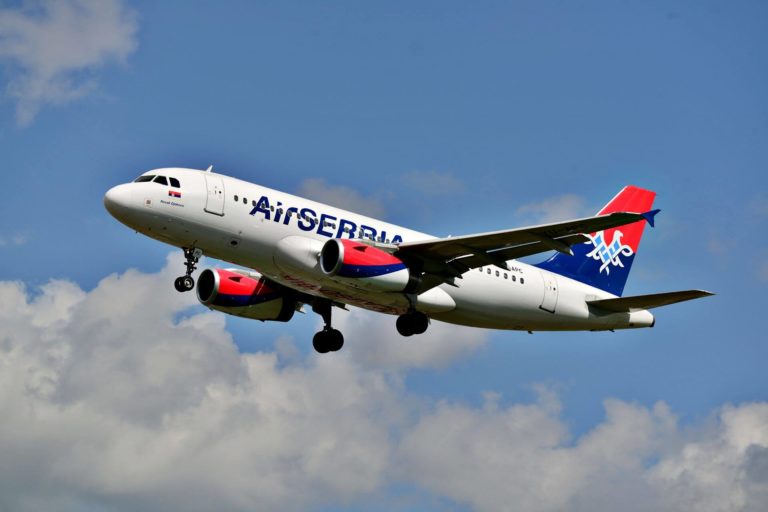 Air Serbia is the biggest and most popular airliner and flag carrier in Serbia. It was the state founded company that was privatized a while ago. Throughout the years, it has grown into a reliable and modern company that transports thousands of passengers all over the world. It should be mentioned that its main hub is Nikola Tesla Airport in Belgrade. It should be also be pointed out that if we compare all legacy carriers in Southern Europe, Air Serbia is at the fourth position.

The beginnings of Air Serbia go back to the 17th June in 1927 when it was established for the first time. It was established as Aeroput and it was a civil airliner. It should be also added that this was the year when the first national hub in Belgrade was formed and it became the international airport. When Kingdom of Yugoslavia was formed, the national flag carrier was Aeroput. The airliners did not transport only passengers at that time, they also used to transport mail and cargo. Furthermore, Aeroput also established its first international flight in 1929, and the route was: Belgrade–Zagreb–Graz–Vienna. 1930s witnessed the boom in terms of establishing various routes of Aeroput since thee were now lights to various European countries, such as Austria, Czechoslovakia, Hungary, Romania, Bulgaria, Greece, Turkey, Albania and Italy.

After the Second World War, the airliner changed its name in 1948 into Jugoslovenski Aerotransport, abbreviated JAT. It then became the largest and most important flag carrier in the newly formed SFRY. This was the time when the fleet got very modern aircraft from the USA and other Western countries. 1963 was the year that marked the introduction of the jet age for this airliner. It should be also noted that JAT established various routes all over the world by 1980s, and it only did not have any flights to South America. In 1987, it was 10th largest airliner in Europe and it should be also noted that it had 76 destinations at that time in 39 different countries.

This company was formed in 2003 and the airliner became flag carrier of Serbia in 2006. The years of negligence and lack of investment resulted in old fleet and unprofitable business conduction. This was also the time when the state started to look for a strategic partner.

The new era for this flag carrier became on the 1st August in 2013 when it was decided that the strategic partner for this airlinier would be Etihad Airways, with the 49% of the share in ownership of the company. The name was changed the same year. During the years after the strategic partnership commenced, a lot of changes have been undertaken for the modernization of not only the fleet but also of the main hub and management.

It should be also mentioned that this company also has its own charter brand and its name is Aviolet. This charter started to work in May 2014 and it should be mentioned that the purpose of this charter is to transport passengers during holiday seasons, i.e. from June to September. The first flight of this one was to Antalya, Turkey, on the 4th of May.

The commencement of the operations of Air Serbia began on the 26th October in 2013. The main hub for this airliner is Nikola Tesla Airport which is located in Belgrade. It should be also mentioned that the airliner has 23 members of its fleet and that its airplanes fly to 42 different destinations in the entire world. However, it needs to be added that Air Serbia has a lot of codeshare agreements with 17 different airlines and this is a great thing since this provides the possibility to its passengers to get to 400 different destinations worldwide. The number of employees in the entire company is 2,316 people and it should be said that the ownership of the Republic of Serbia is 51%. The revenue in 2017 was 289.69 million EUR. The total net income in the same year was 16.46 million EUR. It should be mentioned that the total value of the assets in 2017 was 174.56 million EUR.