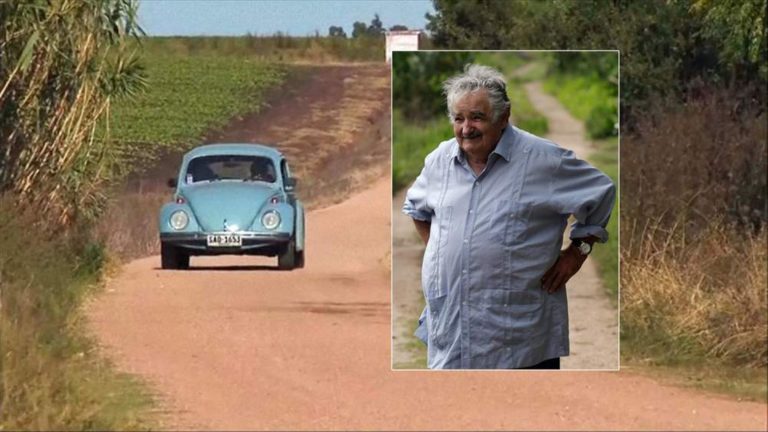 MONTEVIDEO, Uruguay – Uruguay’s enigmatic President  said that, despite many “ridiculous” offers from Uruguay and abroad, he will never sell his “beloved” old Volkswagen Beetle, a car the charismatic leader is often seen driving around the nation and to important political events.

Mujica repeatedly defended the “affection” that he has for his dear “Fusca,” the popular name for the VW Beetle in Brazil, Paraguay and Uruguay, the car that he first had contact with as a teenager in the 1950s. Mujica touched on the topic after several offers made for his “Fusca” became public. Sergio Varela, an Uruguayan businessman and acquaintance of Mujica’s, along with the Mexican Ambassador to Uruguay, Felipe Enríquez, both made made offers for the automobile. Several other foreign diplomats also put in their bids at a traditional bi-partisan gathering and barbecue at Varela’s residence. The most notable offer, the Uruguayan leader confirmed, was made by an unnamed Arab sheik at the G77+ China Summit held in the Bolivian city of Santa Cruz de la Sierra in June.

Apparently, Mujica turned down the Arab’s offer of one million dollars. When asked why there is so much interest in the car, Mujica said that it is “likely because humans have some sort of strange fetish with needing material items, and paying insane sums of money for these items.” He says he is not interested in such things, although he admitted that he “closely holds” onto the hammer his father gave him many years ago. The reason for this according to Mujica, apart from the fact that he “does not need the money” in that “ridiculous sum,” is that the 1987 sky-blue Beetle was given to him by some friends decades ago, and that they would be “offended” if he got rid of the car.

Thus, he is holding onto the car for sentimental reasons. The friends he is referring to are his old colleagues from university and later, activist and political organizations, and his wife, fellow politician and current Senator Lucía Topolansky, belongs to that group. Thus, the “Fusca” is sentimental because it is “the fruit of a collection” held by the group of friends. “We could never sell it because we would offend this group of friends, we regaled us with this gift years ago,” said a jovial Mujica in an interview with Montevideo-based radio station M24. “Even prior to driving and owning one, we were always admirers of this same model of the car,” Mujica said. “It is strange because when we were young guys, we thought that the car looked terrible, but as the years passed and as we intended to change the world in which we live, we fell in love with them.” Enríquez, the Mexican Ambassador, initially “informally” offered Mujica ten 4×4 trucks or SUVs in exchange for the Beetle and Mujica denied the Mexican’s offer, and was “surprised and bewildered” at the proposal.

However, he later said he found himself thinking about the offer as the trucks could “serve a good purpose in providing transportation to rural health operations or Plan Juntos (a home-building initiative in underdeveloped areas).” Similarly, he would have donated the money to those programs had he sold the car to the Arab sheik. Eventually, however, due to his “obligations” to his circle of friends, he denied all offers. Instead, the “Fusca” will “vegetate in the garage” of his farmhouse next to the other VW Beetle the couple owns, but the other one is in “terribly rickety shape” and does not run. “Both cars will stay with us, with the “Fusca” mostly resting and being taken out for little rides here and there, while we are still alive,” Mujica said jokingly. “Then, after we are gone, the future will decide the fate of both automobiles.” For the record, in the last sworn statement of assets and income provided by Mujica, he assessed the value of the “Fusca” at $70,000 Uruguayan Pesos and the other non-running version at $37,000 Uruguayan Pesos. This translates to approximately $2,950 US and $1,600 US, respectively. The last time the “Fusca” made a public appearance was last month when Mujica drove the automobile to place his vote in the presidential election, the first round of which was won by his predecessor (and potential successor) Tabaré Vázquez, a fellow member of the center-left Broad Front (FA).

Since no candidate met the minimum required for an absolute majority (50.1 percent) victory in the first round of presidential elections, Vázquez (47.9 percent) and Luis Lacalle Pou (30.9 percent) of the right-wing National Party (PN) will contest for the presidency in the second round run-off vote set for November 30. In the 2009 election, Mujica defeated Luis Alberto Lacalle, Lacalle Pou’s father, in the second round by a score of 54.6 percent to 45.3 percent. When Mujica was asked how he felt leaving the presidency (in March of 2015), he said he was confident in Vázquez’s ability to keep the country on the right track and speaking about himself, he told the journalists to “remember June.” He was referring to another time when he (and the “Fusca”) came to central Montevideo to place his vote in the primary election earlier this year. He was also asked then how he felt about his term winding down and, smiling, he replied: “I cannot wait to take off these tight shoes.” The latest development with the “Fusca” is another interesting example in a line of “Mujica-isms,” certain occurences involving Mujica that have endeared the Uruguayan leader to millions around the world and have shed light on the small South American nation. The 79-year-old “Pepe” Mujica, President since 2010, is famed for his decisions to forego the luxuries of leading a country. Even the “world’s poorest leader” title does not ring well with him, and he has repeatedly called out other politicians (whose most sensitive ‘organs’ are their pockets, according to Mujica) in Uruguay who have not supported initiatives to lower parliamentary salaries and ban use of public funds by politicians.

Mujica’s comments and actions on economic issues came after Uruguay, under his leadership, saw its nation claim the envied position of most equal economy in Latin America, as well as, by some sources, having the highest per-capita income, and he did so by lifting millions out of poverty and overseeing a drastic rise in the quality of life of Uruguay’s citizens. Although he has enriched the country, he has not enriched himself. Instead of residing at one of the properties used as presidential housing, the Residencia de Suárez, a mansion in the leafy Montevideo neighborhood of Prado, Mujica chose to reside at a one-room chrysanthemum farmhouse in Rincón del Cerro on the edge of the Uruguayan capital with his wife. Additionally, he donates 90% of his presidential salary to those in need, giving much of it to social funds for the disadvantaged and another amount for small businesses. Instead of riding around in the presidential luxury cars reserved for leaders and dignitaries, he prefers, of course, his beloved “Fusca.”

This is not some new trend for Mujica, either. Upon his entrance into politics, he joined the Movement of Popular Participation (MPP), a left-wing group composed of many of his former colleagues in the Tupamaros urban guerrilla group. As a member of the MPP, he ws elected to the Chamber of Deputies (lower house of Congress) and arrived to his first session on a Vespa scooter. In an interview with The Guardian, Mujica previously said that his contemporary viewpoints are a reflection on his path. “I’m not the poorest president. The poorest is the one who needs a lot to live,” he said. “My lifestyle is a consequence of my wounds. I’m the son of my history. There have been years when I would have been happy just to have a mattress.”