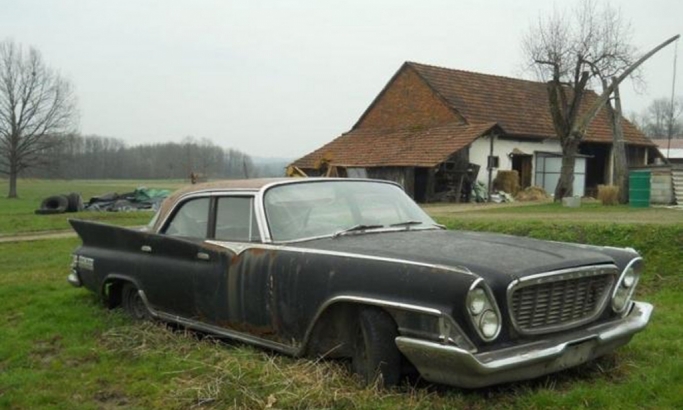 PRNJAVOR- The luxurious automobile, a Chrysler limousine from the 1960’s, which was gifted to Josip Broz Tito by the President of the United States John Kennedy, now rots in a field in Strpci.

This car, in which the two presidents and their first ladies drove around Belgrade, now lays neglected amidst the tallest of grass fields. The limousine, made in the halls of “General Motors ” in Detroit, has been rotting for years, outside in the cold, on the property of Momcilo Cavic. The Chrysler was left there a few years ago and the owner hasn’t been heard from ever since he moved abroad. Cavic got the car before the war from a public auction at the headquarters of JNA in Belgrade, and he drove it to Drvar, the place where he was born. When the city that bore Tito’s name started falling into the hands of enemies in the autumn of 1995, people began to move out in large numbers, and the owner managed to get the car out and drive to Strpce in it. Amongst those who drove the Chrysler, is a professional driver Jelenko Maric, who continued to live in Prnjavor after fleeing Drvar. “I enjoyed driving that miracle of an automobile for a few years. I attracted the attention of people passing by, because a car like this doesn’t exist on the premises of the old country. There were several offers from potential buyers, and they even went as high as 30 000 EUR. The sale never happened because my uncle, the owner of the car, didn’t want to sell it” says Maric.

He says that the Chrysler is in good condition and that with minor interventions, it could cruise the roads once again. “It sure stands that this car holds a special value, especially to wealthy collectors, purely because of the fact that Kennedy custom ordered it and gifted it to Tito. These kinds of vehicles would fetch astronomical amounts of money in the West” explains Maric. Because of the tragic fate of President Kennedy, who was killed in Dallas a few months after delivering this gift to Tito, the neglected Chrysler from Strbac became even more of a one of a kind rarity. Even the county tourism organisation is aware of it and they are trying to turn this four-wheel attraction into a tourist attraction. Nothing can be done without the owner’s consent Boris Zec, a local community member, says that they are maybe not even aware of the kind of treasure that lays in the grass field and rots beneath the open sky. “The limousine is privately owned, so without the owner’s consent, who has moved abroad, we cannot do anything” says Zec.