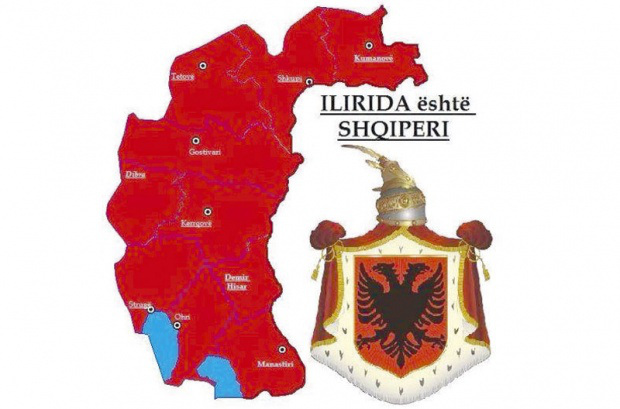 SKOPJE – “Ceremonial” declaration of Albanian so-called “Republic Ilirida” was performed in the center of Skopje, at the plateau in front of the statue of Skanderbeg, where self-proclaimed president – former member of the Macedonian parliament and leader of the “First Albanian party in independent Macedonia” (PDP) Nezvat Halili – read the act on self-proclamation.

The self-proclaimed president is of the new state sad that the decision on the declaration of Ilirida was based on the Constitution of the United States, which says that a man has the right to self-determination. He added that the request that Macedonia functions as a state with two republics bases on the “example of the former federation between Serbia and Montenegro”. Halili asked Prime Minister of the Government in Skopje, Nikola Gruevski,  to “order parliament to start proceedings for the federalization of Macedonia.” At the gathering in Skopje, initiators opened a process of collecting signatures for a referendum on the formalization of the formed Republic of Ilirida. Prime Minister of the new Albanian “republic”, as it was said, will be Baki Sulemani, and part of the leadership is also the president of the National Front for Human Rights and Freedom, Idriz Sinani. He told Albanian media that he is convinced that “after the proclamation of Ilirida”, the functioning of the state will be regulated by the example of the cantons in Switzerland. One parliament will be for Albanians, one for Slavs, all those who will live in the territory of Ilirida. They will have equal rights in accordance with international law. “We will control the Republic of Ilirida. Our territory will be guarded by the forces of Ilirida,” said Sinani.