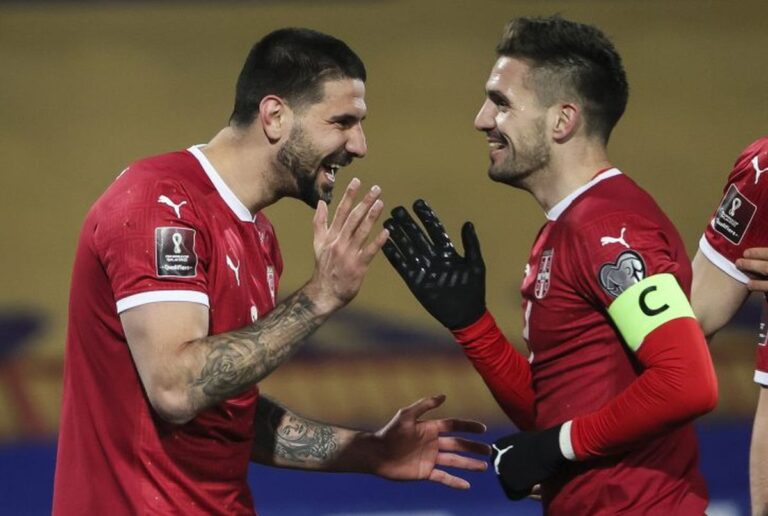 Aleksandar Mitrović, the 26-year-old striker who plays for Fulham in the English Premier League, scored a superb goal for his country in their World Cup qualifier against the Republic of Ireland. Serbia won the game 3-2, and it was Mitrović who stole the headlines and reaped maximum reward, with a superb, 30-yard lob in the 68th minute of the game.

The game started well enough for the Republic of Ireland when Alan Browne opened the scoring for his side in the 18th minute. It ended the Republic’s seven-game goal drought. But, they were pegged back to 1-1 in the 40th minute of the match by Dušan Vlahović, the striker who plays his football for Italy’s Serie A side, Florentina.

When people talk about super-subs, Mitrović’s introduction in the 63rd minute was to be of maximum significance. He not only scored 5 minutes after coming onto the pitch with his precocious lob, he also netted Serbia’s winner in the 75th minute. Although the Republic clawed another goal back in the 86th minute courtesy of James Collins, Serbis ran out 3-2 winners.

But the night belonged to Mitrović, who, by scoring two goals, becomes Serbia’s joint-leading goal scorer of all time, and with a few more games ahead of him, he will surely soon get a maximum goal tally that will make him the undisputed leading scorer.

Although he was only on the pitch for 30 minutes, his contribution was one of maximum proportions. Not only did he score two goals, but he was also prepared to help out in defence. But in one incident, when he tacked the Republic’s Aaron Connolly, and it looked for a moment as though he might have conceded a penalty. But the referee waved play on, and the danger passed.

Man of the Match Dušan Tadić

Despite Mitrović’s two goals, the man of the match was undoubtedly Serbian skipper Dušan Tadić. The 32-year-old, who is also captain of Dutch giants Ajax, had a hand in all three goals, delivering a performance of maximum quality.

Tadić will be pleased to put behind him the nasty incident after Ajax played PSV Eindhoven recently when the player has a coin thrown at his head by a disgruntled PSV fan. Tadić’s three assists in this World Cup qualifier, and the man of the match award, will have dimmed that unpleasant memory.

Mitrović can Help Fulham to Avoid The Drop

Fulham FC will be hoping that Mitrović’s two goals for Serbia will help the player to restore his confidence to the maximum. He had to miss some games recently after having been diagnosed a Coronavirus infection.

It followed a reprimand from Fulham manager Scott Parker when he called the Serb’s behavior “unacceptable,” having been one of a number of high-profile footballers who contravened COVID-19 restrictions over the festive season.

Mitrović is an important goal scorer for Fulham. He joined the London side at the beginning of the 2018/2019 season on loan from Newcastle. He never quite reached his maximum potential at the Tyneside club, but he soon corrected that when he arrived at Craven Cottage.

In his first season with Fulham, he scored 11 goals from 37 appearances. He did exactly the same in the following season. But now, with Fulham lying third off the bottom of the Premier League and in danger of relegation, they need the maximum amount of points from their remaining games. An in-form Mitrović can make a big contribution toward hitting that target.

So far this season, Mitrović has been something of a bit player for Fulham, but after winning the game for the Serbian men’s national soccer team against Ireland, perhaps Scott Parker will give home more starts. If he hopes to get the maximum out of his squad of players, the Serbian striker surely has to figure more often.

Uroš Račić makes his Debut for the Men’s Senior Team

Serbia’s night against the Republic of Ireland was very constructive indeed. Apart from the win, it also gave a chance to 23-year-old Uroš Račić to make his debut for the senior side. He used it to the maximum to try and claim a regular place in Serbia’s starting eleven.

The central midfielder plays club football for Spanish La Liga side Valencia, and he is the glue that holds their midfield together.

Račić began his professional career in March 2016 with the OFK Beograd U19s. Three months later, he was spotted by Red Star Belgrade. In 2018 he was bought by Valencia. He then spent the next two years being loaned out to the likes of CD Tenerife and Famalicão. It gave him the opportunity he needed to play regular first-team football and develop his potential to the maximum.

On the international scene, Račić has played at all levels – the U18s, U19s, and under 21s. Now, at the age of 23, he has appeared main stage for the senior Serbian men’s team.

Back on the club scene this season, Račić has impressed – so much so that it is rumoured both Real Madrid and Juventus have got their eyes on him. How the 23 -year-old would love to play alongside the likes of Cristiano Ronaldo, one of Europe’s deadliest strikers according to Sportingbet, and a player who certainly knows how to get the maximum out of the players around him.

But the in Serbia team understands that at the moment, Račić is prepared to stay put. One of the concerns that the player has is that if he did complete such a move, he would have to sacrifice getting maximum playing exposure – something which he is almost guaranteed to get with his current club, Valencia. Apparently, he has made it clear that the only thing that would prompt him to move on would be if Valencia’s manager, Javi Gracia, indicated he should.

Earlier on during the year, the Serb scored his first goal for Valencia, and what a goal it was. It was a superb strike from 35 yards out that left the La Liga league leaders Atletico’s goalkeeper pawing at the air as the ball rifled past him, swinging into the top right-hand corner of the goal. It was s goal of maximum quality, on a par with the one his national teammate Aleksandar Mitrović scored against the Republic of Ireland.