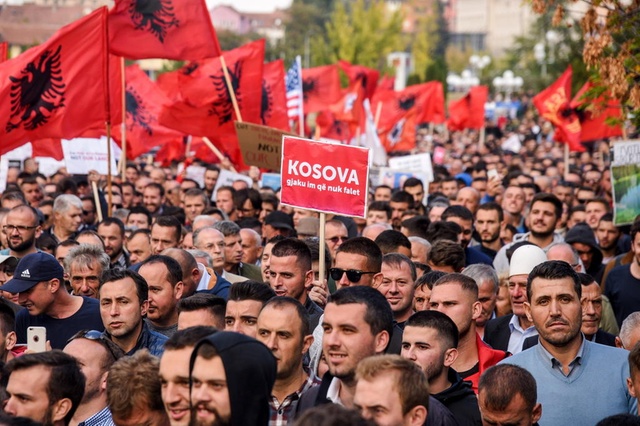 “Albanians’ insanity”, as some of the eye witnesses described the daylong outbursts of extremism, once again showed how volatile is the situation in Kosovo, where Serbs are unsafe and international community powerless, writes Serbian daily “Vecernje Novosti”.

Tensions that have been raised in the southern Serbian province since morning, at one point threatened to explode in a mass clash between Albanian protesters and police, who tried to protect the convoy of buses and cars with displaced Serbs from Musutiste, near Suva Reka.

At the entrance to the village the convoy was awaited by several hundred Albanians, who shouted slogans of KLA (UCK – Kosovo Liberation Army), cursed and threatened Serbs they will be burned together with their sanctities, and bikers sped through the streets carrying Albanian flags.

Among the protesters and policemen there were dozens injured, and after four hours of waiting to be allowed passage to the Church of the Virgin in Musutiste, Serbs went to the monastery near the village of Zociste.

Incidents also marked the attempt of displaced Serbs to attend the liturgy in the Church of Dorminition of the Virgin in Djakovica. Gathered Albanians stoned the vehicle of Kozarev, who said that in recent time in the region occur many extremist elements, who rattle weapons and want to return to the dark past.

“This a proven recipe for intimidating Serbs and prevention of a massive return of displaced and expelled Serbs to Kosovo and Metohija. But, Serbs will not give up,” said the minister for the return in Kosovo government Dalibor Jevtic.

EU Office for Kosovo and Metohija expressed on Twitter “concern over incidents in Musutiste”.

“Damn ‘skije’ (a derogatory term Albanians use for Serbs) we will kill you”, “we will burn you along with your churches”, “you don’t belong here’, “KLA will send you all to Ribe (the village where the notorious ‘Yellow Hous’e known for organ harvesting is located)”, are just some of the slogans and comments that could be heard in the raging mob,” writes Serbian daily Blic.